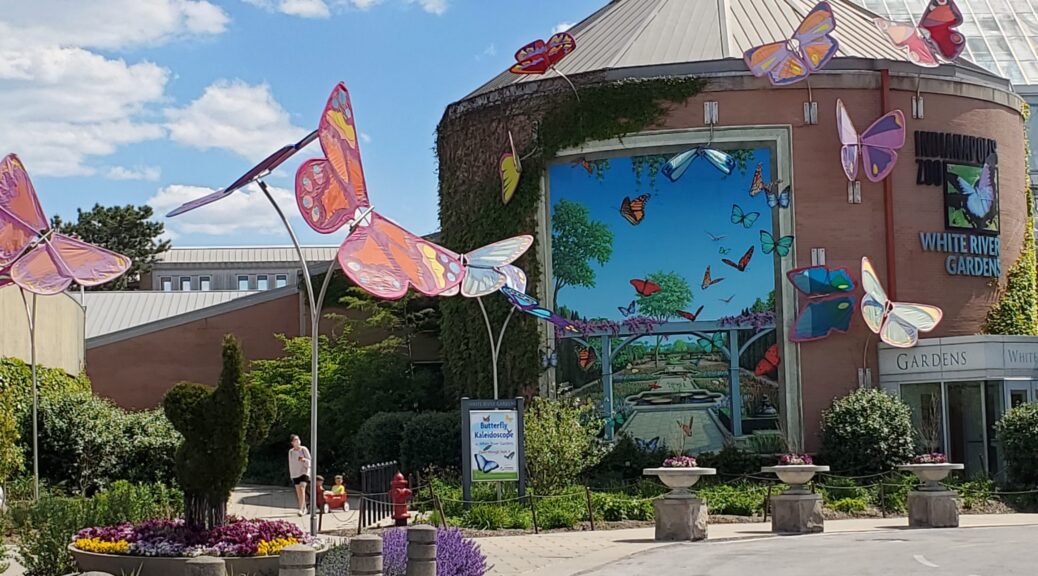 Indianapolis is one of those places that is so close to where we live but yet I’ve never stopped to give it a second thought about taking a vacation there. I had heard from friends there was a great children’s museum, so Indy was sort of percolating on the back burner of my brain, but again, there always seemed to be a “better” place to vacation. However, the stars aligned this spring and Indy started yelling at me with a bullhorn to come visit! So we did! A friend posted on Facebook the awesome time her family had at the Indianapolis Children’s Museum over spring break, and then our best friends who we vacation often with told us they were going to be in Indianapolis in May for a volleyball tournament that my friend was coaching in. Okay, okay Indy. I get the message. A lot of hotels had restricted swimming hours and no breakfasts due to Covid, but thankfully we found a Holiday Inn Express outside the city that had an operating indoor pool and they just started their hot breakfasts (and cinnamon rolls!!!) back up.

We decided to go for an extended weekend – Thursday thru Sunday – since Eli was still in school and had just missed 4 days for Gatlinburg. It was a great amount of time to do what we wanted – the Indianapolis Zoo and Indianapolis Children’s Museum – plus have time for swimming and relaxing at the hotel and exploring some local playgrounds.

Our first day, we found the best climbing playground the kids had ever seen! It was called the Colts Playground on the Canal, and was donated by the Colts NFL team, so the entire structure was their team color – blue 🙂 It sat on a cute little canal that ran through Indianapolis and had some shops and eateries. I really wanted to rent a surrey to ride along the canal but it rained Sunday morning when we were supposed to rent one. The playground was definitely for older kids, as it was all climbing, and the huge slide could only be accessed by climbing up into the ball tower thing. Ava is tall for a 5 year old and she couldn’t quite reach some of the rope rungs and handrails for climbing ~ she opted to climb up the slide itself, which quickly became a problem when all the other kids were going down it! But, if you have 7+ year olds, it’s an awesome place!

Our first full day we went to the Indianapolis Zoo. From the website, it looked like it was going to be awesome and I was super excited for it. However, the zoo itself was a huge let down. A big draw for the zoo is the free dolphin show that happens 3 times a day. We don’t have dolphins at the Columbus Zoo, so I thought the kids would like to not only see them, but watch them perform tricks and play. The Indy zoo had timed reservations for admission, so we got the second time slot of the day. Walked up to the ticket counter and was informed all the free dolphin show passes had been given out for the day. What?! They made guests register for a timed entrance, but didn’t space out the dolphin show tickets also? I simply don’t believe that every single person who walked into the zoo at 10am was going to stay all day for the dolphin show at 5pm. That’s ridiculous. So, no dolphin show for us.

The other exciting things I saw to do on the website were an aerial tram that took you from one part of the zoo to another, a train that ran completely around the African safari exhibits, a carousel, mini roller coaster, feeding giraffes, and feeding flamingos. Ok, the dolphins were a bust, but everything else would be fun, right? WRONG! The feeding giraffes and feeding flamingos happened at the exact same time but in different parts of the zoo, so you had to choose one over the other to actually do. The carousel was not running. The aerial tram only went around a single orangutang exhibit. We rode the train and saw ZERO animals because the train goes behind all the exhibit buildings and the trees were too grown up in between buildings to see anything. Eli liked the roller coaster, but Ava was too short to ride on it. So, we made the best of the zoo by petting sharks, feeding flamingos, and watching the brown bears. Other than those things, it was an expensive bust of a day. Wouldn’t recommend the zoo.

The Indianapolis Children’s Museum was amazing!! Highly recommend going there, even if that is the only reason for visiting Indy. We spent an hour outside at the sports exhibit before even going inside to the 5 levels of exhibits and activities. You could try out so many different sports – basketball, tennis, baseball, hockey, golf, race car driving, and track. Plus there was a giant treehouse!

Inside the museum was a bit overwhelming, but Ava was our trusty map-holder and we explored level by level so as to not miss anything. Most of the exhibits were great for the kids – nature/weather, job simulator, international countries, dinosaurs/archeology – but there were a few that went over our kids heads and they needed to just be older to understand (segregation in schools and race history). Including the outside area, we spent almost 5 hours at the museum! There is a nice food court area for a lunch or snack break. Plus, a huge gift shop that you can’t miss entering and exiting…unfortunately! Ha!

If you’re an ice cream aficionado (is there anyone who isn’t?!?!) I highly recommend “Sub Zero Ice Cream” in downtown Indy. You choose a liquid base – milk, cream, custard, almond milk – then add in liquid flavorings, and mix ins (nuts, candy, etc.). Everything is mixed in a bowl and then frozen using liquid Nitrogen! It makes the smoothest, creamiest ice cream, plus is really cool to see the process.

Overall, Indianapolis was a great weekend destination and we enjoyed the Children’s Museum. It’s pricey but worth it! Save your money and don’t go to the zoo, but otherwise, have fun!

Thank you for subscribing.

we respect your privacy and take protecting it seriously